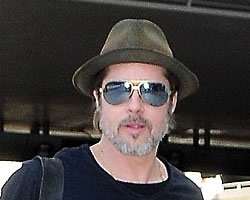 Scruffy chic! Brad Pitt looks dashing with beard and fedora hat as he arrives at LAX for solo flight.

He is usually seen accompanied by his wife and/or children but family man Brad Pitt cut a solo figure as he jet out of LAX on Saturday, looking dashing in a trendy ensemble.

The Fury star strode along in well-worn leather shoes as he carried a messenger bag. He topped the look off with a dark brown fedora and aviator sunglasses.

Meanwhile, Brad and Angie are reportedly considering bringing another addition to their worldly family – a two-year-old Syrian boy named Moussa currently living at the Altinozu refugee camp in Turkey.

According to Woman’s Day, the Unbroken director met Moussa while visiting refugee camps as a United Nations ambassador for refugees earlier this year.

A charity worker described their encounter: ‘Angelina heard about him from a translator and she was obviously upset, but Moussa was just beaming from ear to ear and when he saw she was wiping tears from her eyes he toddled up to her and gave her a hug and it was a very emotional moment and everyone was suddenly laughing and smiling.

‘She kissed him on the top of his head and then they were basically inseparable for the rest of the visit.’

Angelina witnessed the heart-breaking conditions she witnessed and stories she heard during her most recent visit to refugee camps.

The Maleficent star shared her shocking experience at informal settlements for Syrian refugees and displaced Iraqis in a recent op-ed for The New York Times.

Having visited Iraq five times since 2007, ‘I have seen nothing like the suffering I’m witnessing now,’ Angie began.

he went on to describe how refugees of war-torn Syria have lost family members to violence, torture, and rape and are ‘struggling to survive’ while ‘surrounded on all sides by violence.’

Meanwhile, Brad and his Fight club co-star, Edward Norton, are teaming up on a Lewis And Clark mini-series.

Edward, 45, recently shared with Conan O’Brien: ‘When we were making Fight Club, Brad and I realized that we had this mutual fascination with the Lewis and Clark story.’